I’ve looked into a lot of the internals of the Loxone Miniserver (the CAN bus protocols, the SD card file system, etc) and written it down with a lot of sample code at https://github.com/sarnau/Inside-The-Loxone-Miniserver. For the ambitious i’ve also provided an STM32 ARM implementation of the Loxone Link/Loxone Tree protocol for a lot of hardware at https://github.com/sarnau/LoxLink

All data to or from the device is transmitted as a package.

The app never always read more than about 800 bytes of data at once, e.g. reading the history is done in 4 reads:

With an open connection and without significant change of the fluid level, the current level is send every 30/60 minutes (water/oil) to the computer. There seems to be no way to request it. Because the wireless transmitter only sends the data in that frequency, it probably makes very little sense.

If the level changes (refilling the tank) it updates much more often.

Live data has the following payload:

The EEPROM has three distinct areas:

If there is no description, the value is unknown.

The distance from the bottom of the transmitter to the top of the fluid. The table has one value per cm tankHeight – up to 300cm is supported. If the distance between the top and the transmitter is 0, the capacity is the maximum value. This table is calculated by the tank type A-C automatically, but can be customized to match any shape (tank type D). It is used to convert the level in cm into liter.

The outletHeight is an offset that is added to the level to return the volume of the tank. It can be used to define a reserve.

The history table is 365 entries large. Each entry is 3 bytes. It is a cyclic buffer with an index pointer in the header pointing at todays position. To go into the past increment the index and wrap around at 365 till you hit today again.

The 3 bytes have this format: 0xaa 0xbc 0xcc

The level of the tank based on todays usage is estimated in liters as follows:

Use only Loxone SD cards for the Miniserver. All SD cards have their own CPU which manages the flash memory. For optimum performance, Loxone OS accesses many low-level functions of the SD card, unlike, for example, a digital camera.

Wow, this is exciting! What mystery low level functions are they using? Time to find out.

The server ships with a 4GB Micro SD Card, which is of the SDHC type.

SD cards exists in many different varieties, but have to follow the specifications from the SD Group. This includes the communication on the bit level, as well as how commands are executed. However, there are options to have custom commands or at least non-mandatory commands. It is also possible to only support a subset of commands for a manufacturer, if they supply specific SD cards. Loxone could do that, but it is not probable, just because it makes it really hard for them to switch vendors for their SD cards, if prices and or availability changes. You don’t want to release an update to the Miniserver for different types of SD cards.

As I already looked at the mainboard of the Miniserver, it seems the CPU is talking directly to the SD card. That is not a surprise, considering that even Arduinos can do that easily. The Miniserver does that with the help of some gate logic, probably for buffering. I didn’t really care to look into the exact implementation details too much here.

Considering that the physical communication is standardized and that the actual firmware is read from the SD card by the boot code from the flash memory, I don’t expect too much special code for reading. And I am correct: the initialization phase for the SD card seems to follow the specification from the SD Group perfectly and can detect all types of SD cards up to SDHC.

The detailed information collected during initialization about the card can be requested from Loxone Config via “Detailed Device Info”:

What does these things mean?

The maximum supported capacity is 16GB, so do not use larger ones.

All the technical information is reported from the SD card and only for information. After initialization, what else does the Miniserver do to communicate to the card?

There are three different types of SD Card errors possible:

The Miniserver only uses mandatory commands, this means every single SD card in the market has to implement them. Therefore any SD card from any good manufacturer should work just fine in the Miniserver. That said: there are Chinese manufacturers who sell SD cards with a limited actual capacity (e.g. 2GB) but which identify themselves as e.g. 16GB cards. This will result in data loss!

I’d like to explain some technical details of the Loxone Miniserver. The Miniserver (as well as all extensions) are ARM based, just like all modern mobile phones. It is clocked at just 8MHz.

The Miniserver is ARM based. The CPU is booting from a 512kb flash memory. This code then loads the actual operating system from the SD Card into the additional 64MB of memory and executes it from there.

The CPU is an Atmel AT91SAM9G20 from Microchip. It is a 3,3V 400MHz ARM926 with 32kb internal SRAM and 64kb internal ROM. It is paired with a serial interface Flash memory (AT25DF041A from Adesto Technologies), which is updatable by Loxone – it is one of two chips mounted on the back of the board. This flash memory also contains non-volatile memory used by the Miniserver, like encryption keys, which are not stored on the SD card. The other important chips are two SD RAM chips (H57V2562GTR from SK Hynix) as additional memory with 256MBit each adding another 64MB of memory.

The Ethernet is connected with another Chip from Microchip, the KSZ8051RNL1. Which is a 10BASE-T/100BASE-TX Automotive Physical Layer Transceiver. It doesn’t offer a lot, so most of the load for the different protocols TCP/IP and UDP, ARP, DHCP, etc. are all handled by the CPU.

The SD Card is accessed with some logic gate directly. Nothing special here.

The Miniserver has a battery backed CMOS Real-Time Clock (RTC) via a PCF2123 from NXP Semiconductors. This allows the system to run without an internet connection, while still having a valid time. During boot it is set if possible by testing various NTP servers.

The Relays are HF33024-HLT, which are isolated from the CPU by two ADuM3401 from Analog Devices.

The Analog Out are driven by a AD5724 also from Analog Devices, which is a a complete, quad, 12-/14-/16-Bit, serial input, unipolar/bipolar voltage output DAC. They are driven to have a 10V output range with a 12-bit resolution.

The Analog Ins are driving by a TV1544 from Texas Instruments. It is a CMOS 10-bit switched-capacitor successive-approximation (SAR) analog-to-digital (A/D) converter.

The digital inputs are read by a HVS882 from Texas Instruments. It is an 8-channel digital input serializer, which can handle up to 34V at the inputs with a flexible current limiter – it therefore also protects the CPU from damage. This is the other chip, which is mounted on the back of the board.

The Loxone Link bus is standard CAN bus connected via a CAN controller (MCP2515, also Microchip) to the CPU. It is using a standard CAN Transceiver (SN65HVD232D from Texas Instruments) to protected the Miniserver from defects on the bus. The Miniserver also has a 120Ω resistor built-in, so it has to be on the end of the CAN bus. The CAN bus is clocked at 125kHz (which allows up to 500m of cable length for the Loxone Link bus).

All packages are using the extended frame format. The identifier is therefore always 29-bit (0…0x1FFFFFFF) and the data package is always 8 bytes long. Any CAN bus monitor hardware will work just fine with the Loxone Link bus.

Photo with Labels of the Mainboard 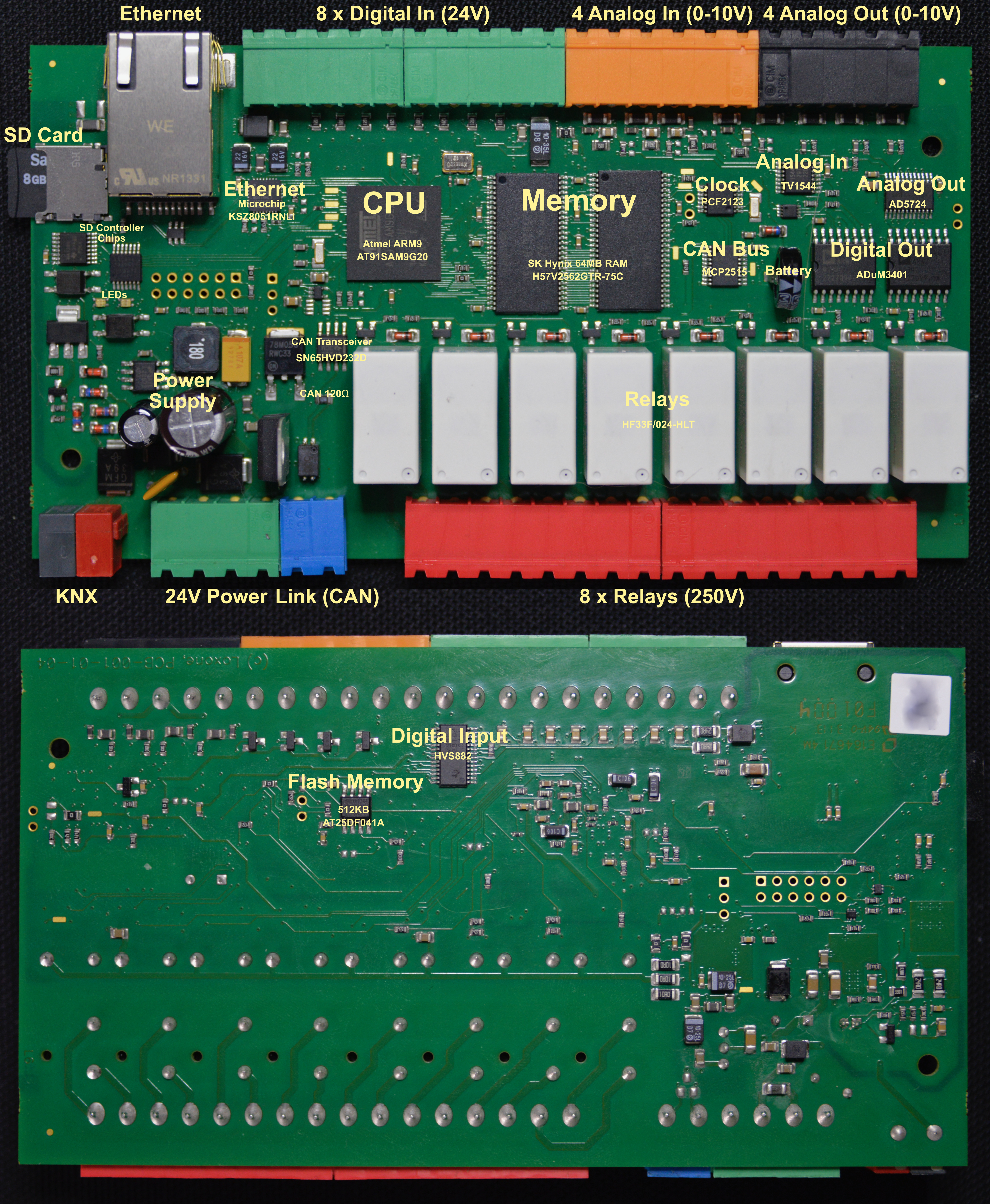 Loxone can parse incoming data e.g. via UDP/HTTP to detect variables. I found their documentation not really good. It feels like it is almost an art to setup these parse strings, while it is actually quite simple.

The string is searched in the incoming data stream. If the full string is detected, it succeeds and returns the value (0.0 being the default). If it didn’t match the whole pattern within the stream, it resets and continues again to parse the data. Only if the whole string was parsed fully, will the matching stop.

Possible characters in the parse string

The returned value is always a 64-bit floating point number, which can result in rounding issues for certain integer values.

It is possible to have several \h and \v in the search pattern. Only the last one will be used. Same with \1, etc. If more than one \1 occurs, the first one will be ignored as well.

A quick Loxone Tip for People in Hamburg, Germany. That’s why it is in German…

Here a quick Gist to uncompress a Loxone LoxCC file in Python: https://gist.github.com/sarnau/e14ff9fe081611782a3f3cb2e2c2bacd

The Voltcraft (Conrad) Charge Master 2016 has a completely different protocol from the CM2010 and other devices.

The USB port is still a serial port which is /dev/cu.SLAB_USBtoUART on my Mac. Every second the device sends a package with 19200 baud 8N1. I’ve written a simple python script to demonstrate reading and interpreting the data. For actual use you should add some error handling.

Only one byte in the slot header is unknown (it seems the Windows software is also not using it) and the device header has a few semi-unknown ones (the version, the temperature, etc) – only the chemical setting is actually used by the Window software.

The full source code can be found on GitHub https://github.com/sarnau/cm2016.

This document tries to describe every detail of the Mobile Alerts sensors, which are sold by ELV in Germany, but are also available at the common suspects (Amazon, etc). Be careful buying at Amazon: certain sensors mention Mobile Alerts, but seem to be designed for the US. They are not compatible with the ELV Mobile Alerts ones!

Mobile Alerts is covering mostly climate sensors, but also contains moisture and door/window sensors plus a sound detector, which acts as a gateway for smoke sensors.

The Mobile Alerts are a version of the LaCrosse Alerts Mobile system made for the European market.

Original 68k Disassembler I wrote for Hatari <https://hatari.tuxfamily.org> in 2010.

It does support all 68k CPUs, including the embedded ones, FPU and PMMU.

It doesn’t compile on it’s own, but requires Hatari source code. But it should be possible with minimal effort to make it stand-alone. All sources can be found on GitHub.